Started watching a movie late at night on tv (think it may have been Film4) and only saw the intro. Maybe 5-10 of the start.
The film was Japanese I think (with subtitles).
A group of children were being trained by a middle aged master to become assassins in a wooden lodge in the bottom of a massive canyon. The film gives off this idyllic vibe as you see the youngsters training and enjoying their themselves and shortly their master gathers them to tell them that their training is almost complete….
The final phase of this training is to pair up with their favourite partner, the person they’re closes to or like the most (I think there are about 6-7 pairs) and then the master instructs them they must fight their partners to the death and then their training will be over! Chaos ensues with the children fighting their beloved friends and it is quite bloody and graphic violence.
When there’s only one child assassin left from each pair the master instructs them to follow him out of the canyon towards their first mission leaving behind the lodge and their friends.
This all happens within about 20 minutes of the films intro and I can’t remember the films title and never saw it on tv again. Please help… 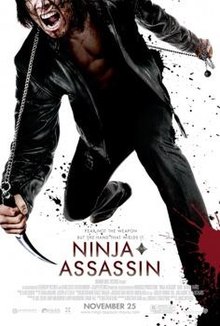 Ninja Assassin is a 2009 neo-noir martial arts film directed by James McTeigue. The story was written by Matthew Sand, with a screenplay by J. Michael Straczynski. The film stars South Korean pop musician Rain as a disillusioned assassin looking for retribution against his former mentor, played by ninja film legend Sho Kosugi. Ninja Assassin explores political corruption, child endangerment and the impact of violence. The Wachowskis, Joel Silver, and Grant Hill produced the film for Legendary...

Can you give us an approximate year? Was it 70’s kung-fu or a modern recent film.

Thank you for the reply’s. Definitely wasn’t Ninja Assassin.
It looked like it was filmed in the 90’s and I think I saw it in the early 00’s.
The fight scene between the pairs is outside the front of the lodge and takes place in the daylight. There is nobody there apart from the master and the children assassins.
Hopefully this helps

Is it possible that only that scene is foreign and subbed and the rest is in English? Could the hero be Chuck Norris or someone like that?

It is possible but I’m pretty sure there wasn’t a “big name hero” star.