Is it an anime? There’s a bunch of them, for example 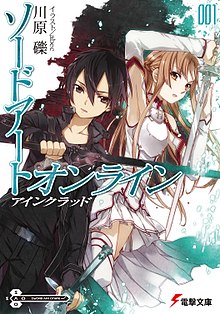 Sword Art Online (Japanese: ソードアート・オンライン, Hepburn: Sōdo Āto Onrain) is a Japanese light novel series written by Reki Kawahara and illustrated by abec. The series takes place in the then-near future and focuses on protagonists Kazuto "Kirito" Kirigaya and Asuna Yuuki as they play through various virtual reality MMORPG worlds. Kawahara originally wrote the series as a web novel on his website from 2002 to 2008. The light novels began publication on ASCII Media Works' Dengeki Bunko imprint from A...