I have been looking for a movie for a long time, but I cannot remember much about it.
I think it is Jackie Chan whos playing. He is some kind of robot technician. He have lots of tiny robots.
I remember that during the movie he enters his house and there is a robot trying to kill him there. Fires rockets from his chest.
It is quit old, I guess around 80’s, maybe early 90’s 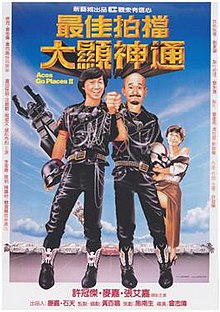 Pages for logged out editors learn more Aces Go Places 2 (Chinese: 最佳拍檔大顯神通) is a 1983 Hong Kong action-comedy film directed by Eric Tsang and starring Sam Hui, Karl Maka, Sylvia Chang. The film has also been dubbed into English and re-edited and was released overseas as Mad Mission II. It is the second installment in the Aces Go Places film series.

this one has the robot with missle. other aces go places have similar too