Need help finding the name of a horror movie

I need help finding the name of this one film where a group of friends do stuff together and they get trapped in a building (i forgot how they ended up there, it was towards the end of the movie) and they each got killed one by one. One of the last guys screamed far in the building but the girl couldnt find him. In the end that remaining girl looked out the window while she was covered in blood and saw herself out in the parking lot with her friends in a car. That scene happened earlier on so she realized she was stuck in a time loop and started screaming at herself outside trying to stop her and her friends from going to the building where they get killed. (Sorry if this is long)

Mine Games: Directed by Richard Gray. With Joseph Cross, Briana Evigan, Rafi Gavron, Julianna Guill. A group of young friends make an incomprehensible discovery in an abandoned mine, but the more they try to change the future, the more they seal... 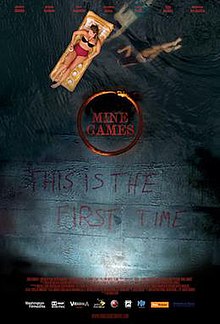 Mine Games is a 2012 American time-loop horror film directed by Richard Gray. A woman in a van seems to awaken from a nightmare about a mine, where a voice screams for “Michael,” and fingers scrabble under a door. The van is at a gas station, where a nearby newspaper announces “couple found murdered in RV.” The van belongs to a group of seven friends – Michael, Lyla, TJ, Claire, Lex, Rose, and Guy – who are traveling to their mutual friends’ cabin in the woods for a vacation. Michael, who is dr...

Quote from the movie’s above Wikipedia page:
“The cycle restarts as the group’s van arrives at the gas station at the beginning of the film. However this time Lyla from the previous cycle is still alive, and she hobbles towards her counterpart.”

Hey, @Skullter, I am pretty sure that the above is the movie you are looking for. Would you please come back to the site and give us a feedback? Thanks!