Near the start of the film the guy’s wife gets murdered by bad people and the people that did it I think were there to get him when he wasn’t home and as they are smashing her with glass one of them said these exact words ‘‘I cant believe this bitch is still alive’’ anyways they do end up killing her.

I think when they said that and with the glass smashing it was because they threw her through a glass shower wall that was in a nice bathroom that was in that home.

Afterwards he finds out and snaps and goes on a hunt to not just kill the people who murdered his wife but everyone else…He was taking out crime lords one by one who were like drug dealers and some of them drug users.

One of the drug crime lords in the Movie kept using a card from a deck of cards and dipping it in his drugs and putting it in the corner of the card and then putting it up to his nose and sniffing it. I also remember that also but not much else when all these bad people where having like a video conference call.

I also remember one of these Crime lords had a very nice log cabin and had armed men walking around it and they did like a video conference call talking about what was going on.

It was a really really good movie I sure wish we could get it. The guys name in the Movie who’s wife was murdered was Jeff because, I remember one of the guys saying it’s to bad crazy jeffy isn’t on out side.

He was riding on some kind of motorcycle in the film probably a Harley and on a highway interstate wearing big black aviator sunglasses this was a white guy in his 40’s I would say with brownish hair, It looked a tiny bit like Nick Nolte or John Diehl and one of the very bad guys he guns down is in a Casino playing at a table game with lots of money…He kills him with a laser sighting on his pistol from a distance at the Casino.

After he kills this very bad person at the Casino with laser sighting the body guards of the guy he killed try to go after him but he high tails it out of there.

After that, One of the cops Bosses in the movie was so thrilled that he was going around and killing all these awful bad people the fact that he was able to kill one in the open at a Casino was unreal the guy said along those lines.

THIS MOVIE IS NOT A MAN APART I WOULD REMEMBER VIN D. 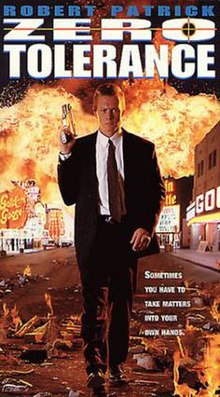 Zero Tolerance is a 1994 American action film from PM Entertainment Group directed by Joseph Merhi and starring Robert Patrick and Mick Fleetwood. After surviving a sneak attack on himself and fellow feds Jimmy (William Steis) and Gene (Michael Gregory) as they transport Mafia boss Raymond Manta (Titus Welliver) out of a Mexican jail, FBI agent Jeff Douglas (Robert Patrick) becomes an unwitting pawn of the White Hand mafia cartel. The White Hand lies to Jeff and says that his family is being he...

That’s a great guess but no that is not it, The movie I am trying to find had English all the way through it. The guy that was talking to other crime lords in the movie while on a video conference call when he was using a playing card to dip into his drugs had brunette hair.